Ethereum is a platform that is intended to allow people to easily write decentralized applications (Đapps) using blockchain technology. A decentralized application is an application which serves some specific purpose to its users, but which has the important property that the application itself does not depend on any specific party existing. Rather than serving as a front-end for selling or providing a specific party's services, a Đapp is a tool for people and organizations on different sides of an interaction use to come together without any centralized intermediary.

Even necessary "intermediary" functions that are typically the domain of centralized providers, such as filtering, identity management, escrow and dispute resolution, are either handled directly by the network or left open for anyone to participate, using tools like internal token systems and reputation systems to ensure that users get access to high-quality services. Early examples of Đapps include BitTorrent for file sharing and Bitcoin for currency. Ethereum takes the primary developments used by BitTorrent and Bitcoin, the peer to peer network and the blockchain, and generalizes them in order to allow developers to use these technologies for any purpose.

The Ethereum blockchain can be alternately described as a blockchain with a built-in programming language, or as a consensus-based globally executed virtual machine. The part of the protocol that actually handles internal state and computation is referred to as the Ethereum Virtual Machine (EVM). From a practical standpoint, the EVM can be thought of as a large decentralized computer containing millions of objects, called "accounts", which have the ability to maintain an internal database, execute code and talk to each other.

There are two types of accounts:

By default, the Ethereum execution environment is lifeless; nothing happens and the state of every account remains the same. However, any user can trigger an action by sending a transaction from an externally owned account, setting Ethereum's wheels in motion. If the destination of the transaction is another EOA, then the transaction may transfer some ether but otherwise does nothing. However, if the destination is a contract, then the contract in turn activates, and automatically runs its code.

The code has the ability to read/write to its own internal storage (a database mapping 32-byte keys to 32-byte values), read the storage of the received message, and send messages to other contracts, triggering their execution in turn. Once execution stops, and all sub-executions triggered by a message sent by a contract stop (this all happens in a deterministic and synchronous order, ie. a sub-call completes fully before the parent call goes any further), the execution environment halts once again, until woken by the next transaction.

Contracts interact with each other through an activity that is alternately called either "calling" or "sending messages". A "message" is an object containing some quantity of ether (a special internal currency used in Ethereum with the primary purpose of paying transaction fees), a byte-array of data of any size, the addresses of a sender and a recipient. When a contract receives a message it has the option of returning some data, which the original sender of the message can then immediately use. In this way, sending a message is exactly like calling a function.

Because contracts can play such different roles, we expect that contracts will be interacting with each other. As an example, consider a situation where Alice and Bob are betting 100 GavCoin that the temperature in San Francisco will not exceed 35ºC at any point in the next year. However, Alice is very security-conscious, and as her primary account uses a forwarding contract which only sends messages with the approval of two out of three private keys. Bob is paranoid about quantum cryptography, so he uses a forwarding contract which passes along only messages that have been signed with Lamport signatures alongside traditional ECDSA (but because he's old fashioned, he prefers to use a version of Lamport sigs based on SHA256, which is not supported in Ethereum directly).

The betting contract itself needs to fetch data about the San Francisco weather from some contract, and it also needs to talk to the GavCoin contract when it wants to actually send the GavCoin to either Alice or Bob (or, more precisely, Alice or Bob's forwarding contract). We can show the relationships between the accounts thus: 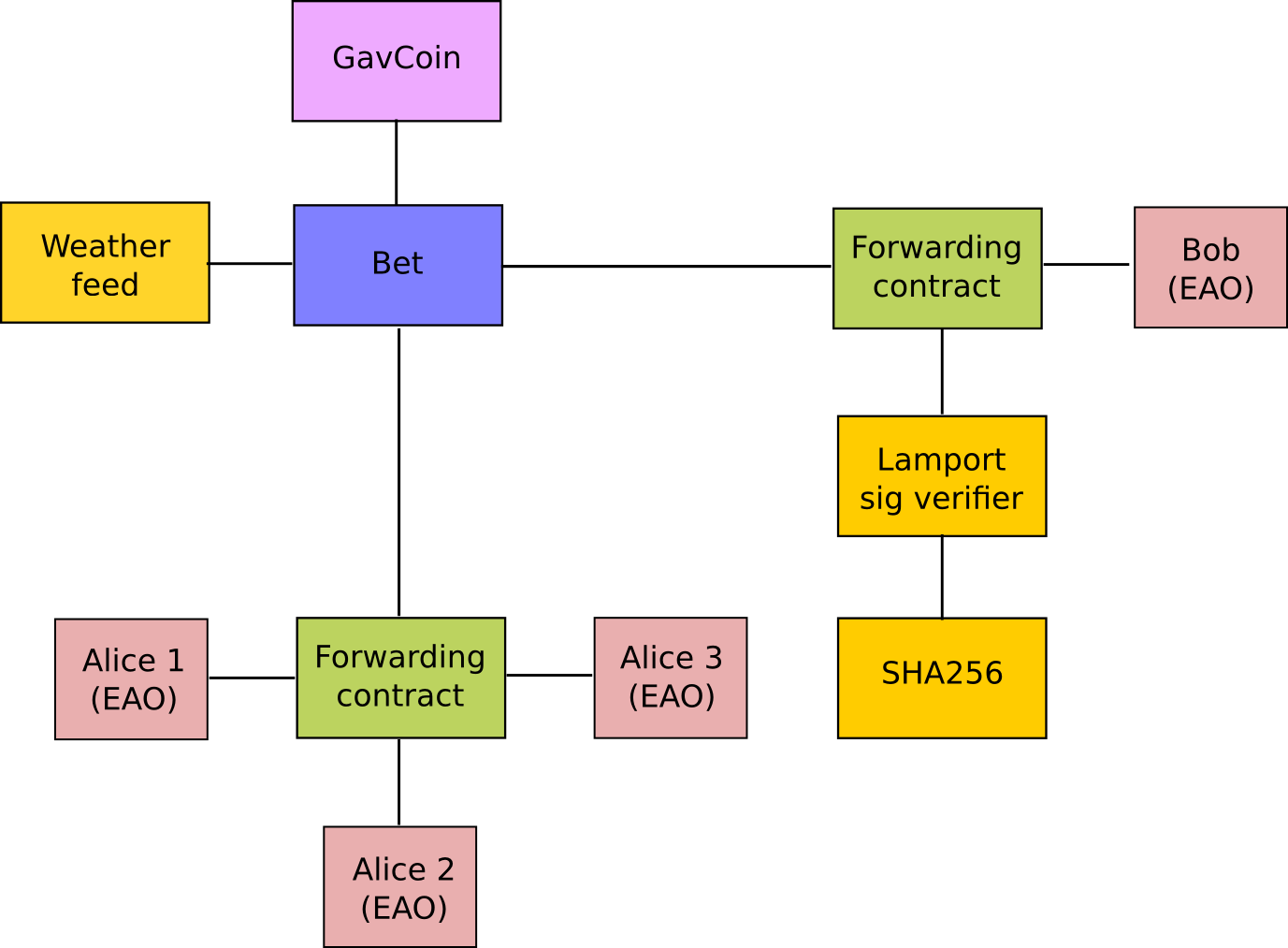 When Bob wants to finalize the bet, the following steps happen: 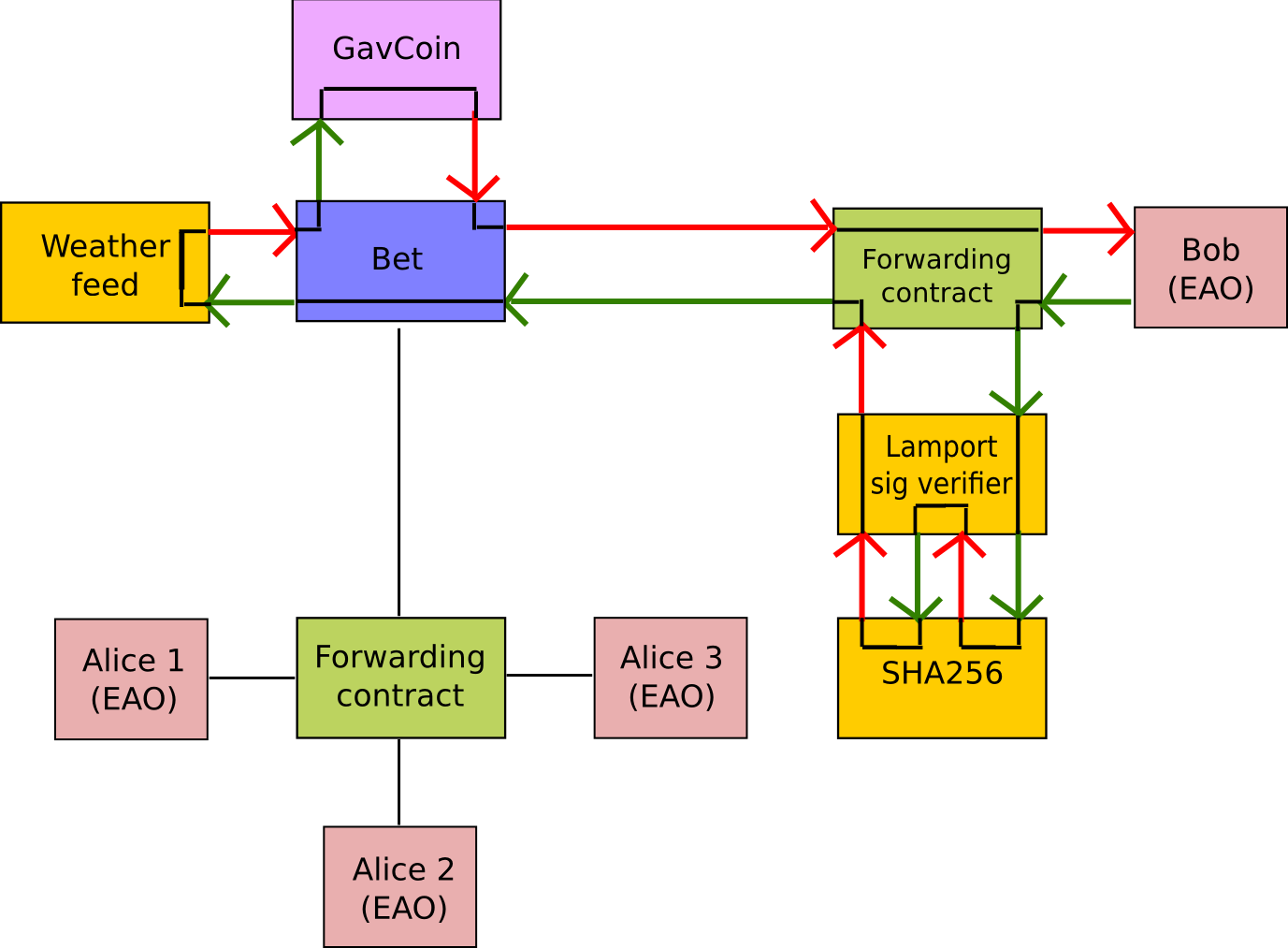